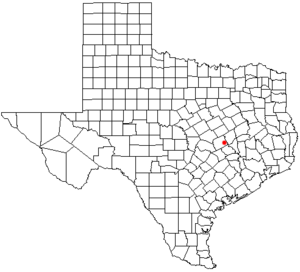 Location of Gause in the state of Texas.

Gause is an unincorporated community in Milam County, Texas, United States. According to the Handbook of Texas, the community had an estimated population of 400 in 2000.

The community is named for William J. Gause, a settler who moved to the area in 1872 and built a home out of lumber hauled from Montgomery. In 1873, he gave right-of-way and 100 acres (0.40 km2) of land to the International-Great Northern Railroad (I&GN). This caused the area to grow and a post office opened in 1874. A schoolhouse that doubled as a church was built in 1876. Gause had approximately 300 residents in 1884 as well as two steam-powered cotton gins and two churches. Gause was a shipping point for Milam County farmers who shipped corn, cotton, and cottonseed oil. The Gause Independent School District was established in 1905.

The population reached its peak around 1915, when 1,000 people lived in the community. Gause slowly declined over the next few decades. Its bank was discontinued in 1927 after 17 years in operation. The combination of a decline in the number of businesses in Gause and the introduction of the automobile precipitated further downturns in the local economy. By the 1960s, the community had 278 residents, down from 750 in the 1940s. The population began to rebound in the late 1980s as more people chose to live in Gause and commute to jobs in nearby industrial plants. In 1990, Gause had 400 residents and eight businesses. The population remained unchanged as of 2000. Despite its unincorporated status, Gause continues to have a functioning post office (zip code:77857).

All content from Kiddle encyclopedia articles (including the article images and facts) can be freely used under Attribution-ShareAlike license, unless stated otherwise. Cite this article:
Gause, Texas Facts for Kids. Kiddle Encyclopedia.