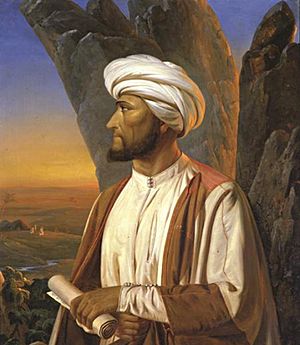 Georg August Wallin (Yrjö Aukusti Wallin, aka Abd al-Wali; 24 October 1811 – 23 October 1852) was a Finnish orientalist, explorer and professor remembered for his journeys in the Middle East during the 1840s.

The Finnish translators of Wallin's letters state that Wallin has become a kind of "patron saint of Finnish oriental research". Among other things, the Finnish Oriental Society holds its annual meeting on his birthday. Internationally, it has been estimated that Wallin was one of the most capable Europeans to set foot in Arabia. His qualifications have been compared to U. J. Seetzen and J. L. Burckhardt, because he has been characterized as an Arabian scholar as the first modern explorer to prepare carefully for his mission, with no intention of leaving anything new to be said to his future. Wallin's notes were inaccurate, but he did not carry other research tools with him.

Kaj Öhrberg notes in his book that Wallin's international reputation was at its highest right after his research trips. He was the first to collect Bedouin poetry and make observations of Bedouin dialects; his observations of Arabic phonetics remained important until the 20th century; he was the first to delve into the study of spoken Arabic. Today, however, Wallin has become a footnote to textbooks after research has gone past him.

Wallin was born in the municipality of Sund on the Baltic island of Åland in 1811, and his parents were registrar Israel Wallin (1777–1839) and Johanna Maria Ahrenberg (1779–1854). He attended Cathedral School of Åbo in Turku and moved to Rauma with the school after the Great Fire of Turku in 1827. The following year, however, he dropped out of school and studied as a student in private. In 1829 he enrolled to study Oriental Languages at the University of Helsinki, graduating with an MA in 1836. He then began writing a dissertation about Arabic and Persian, while working as a librarian in the university library.

In 1839 he travelled to St. Petersburg, where he met Sheikh Muhammad 'Ayyad al-Tantawi and learned more about the Middle East. He made his first expedition to the area in 1843.

When Wallin went for his expeditions he portrayed himself as a Muslim and took the name Abd al-Wali in order to get closer to his subjects. Many people believe Wallin converted to Islam, but there is no proof to support that claim at least according to his diaries and letters. His grave in Hietaniemi cemetery in Helsinki has his Arabic name engraved over it with Arabic letters. He is buried on Christian church ground.

He visited Mecca in 1845, a city otherwise forbidden to non-Muslims, on his first expedition, which took him from Cairo to Ma'an, Al Jauf, Jubba, Ha'il, Medinah, Mecca, and Jiddah.

On his second expedition between 1846 and 1848, he visited Palestine and Persia. During this time he may have adopted Islam, although his writings indicate scepticism toward religion.

By 1850 Wallin had returned to Europe, where the Royal Geographical Society published his Notes taken during a Journey through part of Northern Arabia and awarded him its Founder's Medal in recognition of his ground-breaking research. Wallin completed his doctoral thesis in 1851 and was subsequently appointed Professor of Oriental Literature at the University of Helsinki.

He was asked by both the Royal and Russian Geographical Societies to mount another expedition to the Middle East, but declined, perhaps in part due to failing health.

He wrote that he found European culture oppressive and that he "couldn't adapt [him]self to Europe any more". Whatever the cause, Wallin died unexpectedly on 23 October 1852, only three years after his return to Finland and a day before his forty-first birthday.

Wallin's collected journey writings were published posthumously in the 1860s, edited by S. G. Elmgren. A complete edition of his writings was published in Swedish language (partially in translations) during 2010–2017. An English-language and an Arabic-language translation of this edition are being planned.

All content from Kiddle encyclopedia articles (including the article images and facts) can be freely used under Attribution-ShareAlike license, unless stated otherwise. Cite this article:
Georg August Wallin Facts for Kids. Kiddle Encyclopedia.