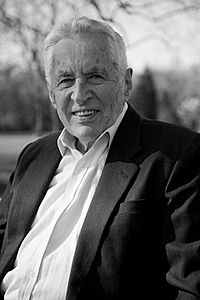 George Mikell (born Jurgis Mikelaitis; 4 April 1929 – 12 May 2020) was a Lithuanian-Australian actor and writer. He was best known for his roles as Schutzstaffel (SS) officers in The Guns of Navarone (1961) and The Great Escape (1963). Mikell has appeared in over 30 British and American movies from 1957 until his retirement in the early 2000s. Mikell was born in Bildeniai, Tauragė district, Lithuania.

All content from Kiddle encyclopedia articles (including the article images and facts) can be freely used under Attribution-ShareAlike license, unless stated otherwise. Cite this article:
George Mikell Facts for Kids. Kiddle Encyclopedia.