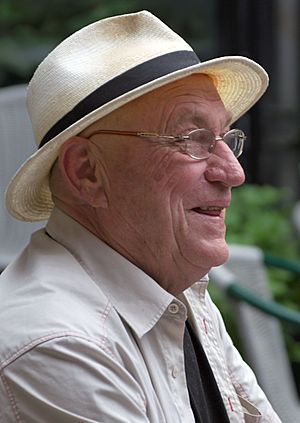 Gert Hermod Nygårdshaug (born 22 March 1946 at Tynset) is a Norwegian author. He has written poems, children's books and novels, and is in particular known for the series of crime novels featuring the gastronomer amateur detective Fredric Drum.

Nygårdshaug's writing enjoys a diverse background from his extensive knowledge and travelling, in particular in South America. Ancient cultures, archaeology, fly fishing, gastronomy and wine are some of the recurring themes in his novels based on his own personal interests and hobbies.

The eco crime novel Mengele Zoo (1989) was in 2007 voted "the People's Favourite" during the literature festival of Lillehammer.

Nygårdshaug resides in Lier, and has been a minor ticket candidate for the political party Red.

All content from Kiddle encyclopedia articles (including the article images and facts) can be freely used under Attribution-ShareAlike license, unless stated otherwise. Cite this article:
Gert Nygårdshaug Facts for Kids. Kiddle Encyclopedia.