Giovanni Carmelo Verga ( 2 September 1840 – 27 January 1922) was an Italian realist (verista) writer, best known for his depictions of life in his native Sicily, especially the short story (and later play) Cavalleria rusticana [it] and the novel I Malavoglia (The House by the Medlar Tree).

The first son of Giovanni Battista Catalano Verga and Caterina Di Mauro, Verga was born into a prosperous family of Catania in Sicily. He began writing in his teens, producing the largely unpublished, but currently quite famous, historical novel Amore e Patria (Love and Country); then, although nominally studying law at the University of Catania, he used money his father had given him to publish his I carbonari della montagna (The Carbonari of the Mountain) in 1861 and 1862. This was followed by Sulle lagune (On the Lagoons) in 1863. 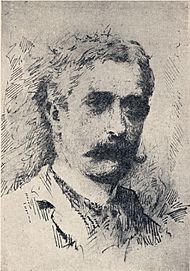 Portrait of Verga, by Antonino Gandolfo.

Meanwhile, Verga had been serving in the Catania National Guard (1860–64), after which he travelled to Florence several times, settling there in 1869.

He moved to Milan in 1872, where he developed his new approach, characterized by the use of dialogue to develop character, which resulted in his most significant works. In 1880 his story collection Vita dei campi (Life in the Fields), including "Fantasticheria" ("Daydreaming"), "La lupa" ("The She-wolf"), "Jeli il pastore" ("Jeli the Shepherd"), "Pentolaccia" ("The Plaything"), and Rosso Malpelo, most of which were about rural Sicily, came out. It also included "Cavalleria rusticana" ("Rustic Chivalry"), which he adapted for the theatre and later formed the basis for several opera librettos including Mascagni's Cavalleria rusticana and Gastaldon's Mala Pasqua!. Verga's short story, "Malaria", was one of the first literary depictions of the disease malaria.

He then embarked on a projected series of five novels, the Ciclo dei vinti dealing the problem of social and economical advancement. However he only completed two, I Malavoglia (1881) and Mastro-don Gesualdo (1889), the second of which was the last major work of his literary career. Both are widely recognized as masterpieces. He then began to write La Duchessa di Leyra, but he only completed the first chapter, while the last two novels, L'Onorevole Scipioni and L'Uomo di Lusso, were not even started.

In 1894 Verga moved back to Catania, to the house in which he had lived as a child. In 1920 he was appointed Senator of the Kingdom (Senatore del Regno) for life (ad vitam). He died of a cerebral thrombosis in 1922.

The Teatro Verga in Catania is named after him. His house in via Sant'Anna is now a museum, the Casa-Museo Giovanni Verga.

He was an atheist.

All content from Kiddle encyclopedia articles (including the article images and facts) can be freely used under Attribution-ShareAlike license, unless stated otherwise. Cite this article:
Giovanni Verga Facts for Kids. Kiddle Encyclopedia.