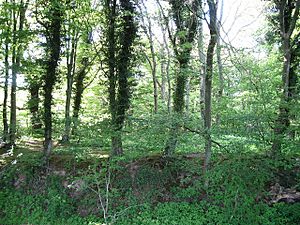 The location of the former Glottenham Castle.

Glottenham Castle was a castle in Mountfield, East Sussex, around 5 miles (8 km) north of Battle Abbey. Built in the 13th century, it was abandoned in the late 16th or 17th century.

In 1990, the site was listed under the Ancient Monuments and Archaeological Areas Act 1979. The site is now a popular camping and glamping site.

All content from Kiddle encyclopedia articles (including the article images and facts) can be freely used under Attribution-ShareAlike license, unless stated otherwise. Cite this article:
Glottenham Castle Facts for Kids. Kiddle Encyclopedia.