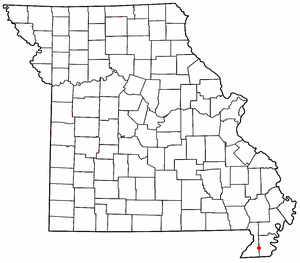 Gobler ( GOB-lər) is an unincorporated community on the border between Dunklin and Pemiscot Counties in the U.S. state of Missouri. It is located nineteen miles west-southwest of Caruthersville.

It still has a post office open two hours a day, six days a week. Until a devastating fire in 1956, Gobler was the home of the Gobler Mercantile Company, a large general store established in 1937 that served the surrounding farming population.

The community is in the Delta C-7 consolidated school district headquartered six miles away at Deering, Missouri. Until 1963, Gobler was the site of the predecessor consolidated District C-6's segregated elementary school for African American students.

All content from Kiddle encyclopedia articles (including the article images and facts) can be freely used under Attribution-ShareAlike license, unless stated otherwise. Cite this article:
Gobler, Missouri Facts for Kids. Kiddle Encyclopedia.