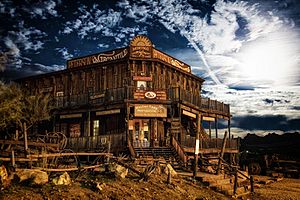 Probably named for the many mines around it, Goldfield was created by the rush that followed the discovery of gold in the vicinity in 1892. The community reached its maximum of about 4000 residents with a general store, hotel, post office, and school. The Goldfield Post Office was established on October 7, 1893 with James L Patterson as its first Postmaster. By late 1897 the gold mines had played out and the population moved out leaving a ghost town. The Goldfield post office was discontinued on November 2, 1898.

After several years a small community evolved on the site of the old ghost town. It was named Youngsberg in honor of George U. Young, the Arizona Territorial Secretary from 1909 to 1910. When mines were opened nearby, a mill and cyanide plant was installed reviving the town. A Youngsberg Post Office was established on March 15, 1920, but when the mines again played out the town was deserted and the post office was discontinued on October 30, 1926. 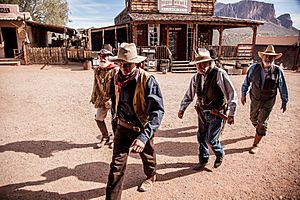 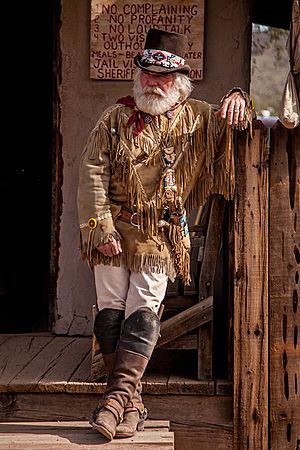 "Buffalo Shilo" During a Free Show 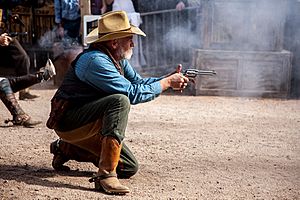 "Tumbleweed" from the Golfdield Gunfighters

All content from Kiddle encyclopedia articles (including the article images and facts) can be freely used under Attribution-ShareAlike license, unless stated otherwise. Cite this article:
Goldfield, Arizona Facts for Kids. Kiddle Encyclopedia.