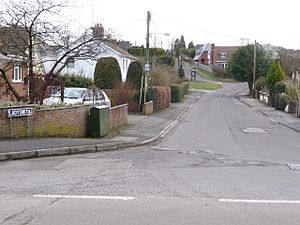 Gomeldon is a small village in the valley of the River Bourne in Wiltshire, England, in the civil parish of Idmiston. It lies about 5 miles (8 km) northeast of Salisbury, between Winterbourne Gunner and Porton, and as of 2012 its population was estimated at about 200.

There is a primary school and, although there is no station, the main railway line to London passes through the village.

Gomeldon was a village in medieval times. Ten buildings on the ancient village site between the modern village and the river were excavated in the 1960s, and a report published by Salisbury Museum. In 1821 the population was 20, and in 1831 there were 48 inhabitants. In 1868 it was a small hamlet in the parish of Idmiston.

All content from Kiddle encyclopedia articles (including the article images and facts) can be freely used under Attribution-ShareAlike license, unless stated otherwise. Cite this article:
Gomeldon Facts for Kids. Kiddle Encyclopedia.