Gordon's Mine and Mill facts for kids 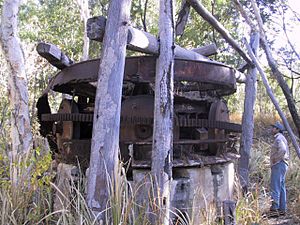 Gordon's Mine and Mill is a heritage-listed mine at Iron Range, Shire of Cook, Queensland, Australia. It was built from c. 1936 to 1950s. It is also known as Iron Range Mine and Mill. It was added to the Queensland Heritage Register on 13 December 2002.

In early 1934 Jack Gordon prospected the Iron Range locality from the Packers Creek field near Portland Roads. In June he followed a gold trail up a tributary of Gordon Creek, a branch of the Claudie River, and discovered what was later called the Iron Range Reef.

Within two years, the region was a hive of activity with 45 men working along an 8 kilometres (5.0 mi) strip. Although the original ore was shipped and railed to the Venus battery at Charters Towers for treatment, the Iron Range mill was in full operation by November 1936 after a Huntington mill was erected by Jack Gordon at the mine following great difficulties in transportation. This was soon followed by crushing machines on the Golden Gate and Scarlet Pimpernel leases. In 1938 the Iron Range mill operated for most of the year; a cyanide plant was installed and 29 men were employed. 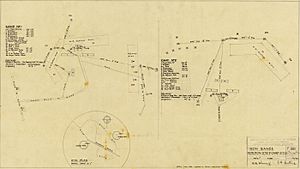 The place is located in an area of dense regrowth rainforest on a hillslope descending to a tributary of Gordon Creek. Access tracks intersect the site on two levels. There are three mine adits on the upper level. The middle adit, or main tunnel, has caved at its entrance. An air receiver is located at the entrance to the main tunnel.

The mill with most of the surviving plant is located either side of the lower access track. Components include, a building site benched into the hillside which contains several surviving bush timber shed uprights and the body of a Roots blower. The lower track passes through the middle of the mill site which contains a partly intact and badly corroded Huntington mill on a concrete base, and a suction gas producer with associated concrete engine mounts. A series of large corrugated iron cyaniding tanks are located along the creek bank below the mill. Remains of at least five cyanide tanks are evident together with a small concrete structure which appears to be a retort flue.

Gordon's Mine and Mill was listed on the Queensland Heritage Register on 13 December 2002 having satisfied the following criteria.

Gordon's mine and mill is significant for demonstrating the material evidence of a successful 1930's mineral exploration and development project that resulted in the support of gold mining operations over a period of twenty years in difficult rainforest terrain on northern Cape York Peninsula.

The surviving plant and archaeology of the site demonstrate quartz mining and milling processes in a tropical rainforest, and rainforest regrowth.

All content from Kiddle encyclopedia articles (including the article images and facts) can be freely used under Attribution-ShareAlike license, unless stated otherwise. Cite this article:
Gordon's Mine and Mill Facts for Kids. Kiddle Encyclopedia.