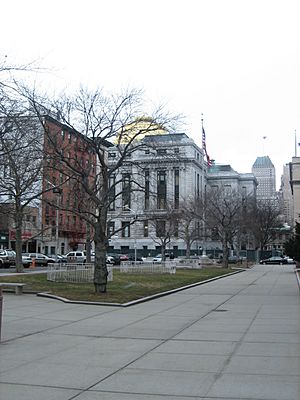 Government Center is a district within the city of Newark in Essex County, New Jersey, United States. It is considered a part of Downtown Newark and is named for the presence of government buildings centered on a plaza known as Federal Square.

The district is just south of Four Corners on the east side of Broad Street and the Prudential Center and north of Newark Symphony Hall and the The Coast neighborhood. To the west near Mulberry Street is the area that at one time was Newark's Chinatown, and host to restaurants serving the district and the sports center. The surrounding area includes mid-rise government buildings and at-grade parking lots.

All content from Kiddle encyclopedia articles (including the article images and facts) can be freely used under Attribution-ShareAlike license, unless stated otherwise. Cite this article:
Government Center, Newark Facts for Kids. Kiddle Encyclopedia.