Government and politics of Seattle facts for kids 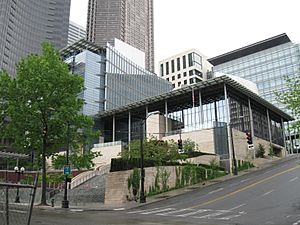 Seattle, Washington, is a charter city, with a mayor–council form of government, unlike many of its neighbors that use the council–manager form. The mayor of Seattle and two of the nine members of the Seattle City Council are elected at large, rather than by geographic subdivisions. The remaining seven council positions are elected based on the city's seven council districts. The only other elected offices are the city attorney and Municipal Court judges. All offices are non-partisan. Seattle is a predominantly liberal city and tends to elect left-leaning politicians to office. Ed Murray is the current mayor of Seattle, serving since 2014.

All content from Kiddle encyclopedia articles (including the article images and facts) can be freely used under Attribution-ShareAlike license, unless stated otherwise. Cite this article:
Government and politics of Seattle Facts for Kids. Kiddle Encyclopedia.