The great spangled fritillary (Speyeria cybele) is a North American butterfly of the family Nymphalidae. 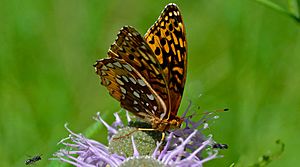 Its wingspan ranges from 62 to 88 mm (2.4 to 3.5 in). It is characterized by its orange color above with five black dashes near forewing base and several irregular black dashes at the base of the hindwing. In addition, two rows of black crescents run along the edges of the wings. Below, the forewing is yellowish orange with black marks similar to the upperside, with a few silver spots on the tip of the wing. The hindwing is reddish brown with silver spots on the base and middle of the wing. A broad yellow band and silver triangles are the most notable qualities on the wing, next to the brown margin. Females tend to be darker than males and individuals from the western reaches of this species range tend to be brighter orange. Similar species include the Aphrodite fritillary (Speyeria aphrodite), the Atlantis fritillary (Speyeria atlantis) and the northwestern fritillary (Speyeria hesperis). It is distinguished from the Aphrodite and Atlantis fritillaries by a wide light submarginal band on the hindwing and instead of black spots, black dashes form on the margins of the forewing. 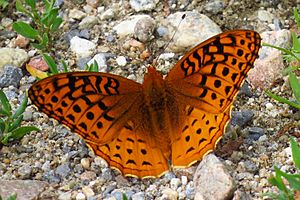 The great spangled fritillary covers a wide range of North America stretching from southern Canada to northern California on the west to North Carolina on the east. Prime habitat for this species includes moist meadows and woodland edges.

All content from Kiddle encyclopedia articles (including the article images and facts) can be freely used under Attribution-ShareAlike license, unless stated otherwise. Cite this article:
Great spangled fritillary Facts for Kids. Kiddle Encyclopedia.