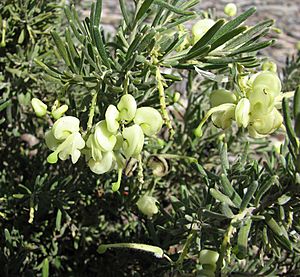 Grevillea lanigera, commonly known as woolly grevillea, is a small shrub which is endemic to Victoria and New South Wales in Australia.

The species shows considerable variation in its habit and other characteristics. It may be prostrate or erect, the latter forms growing from 0.3 to 1.5 metres in height. The red flowers may occur throughout the year, but are most prolific in winter and spring. It has hairy leaves and branchlets, giving rise to the specific epithet lanigera derived from the Latin words lana (wool) and ger (to bear or carry).

Grevillea lanigera occurs in an area that extends from Wilsons Promontory in Australia northwards to the south coast of New South Wales and nearby mountain ranges.

There are a number of named cultivars and forms including the following:

All content from Kiddle encyclopedia articles (including the article images and facts) can be freely used under Attribution-ShareAlike license, unless stated otherwise. Cite this article:
Grevillea lanigera Facts for Kids. Kiddle Encyclopedia.