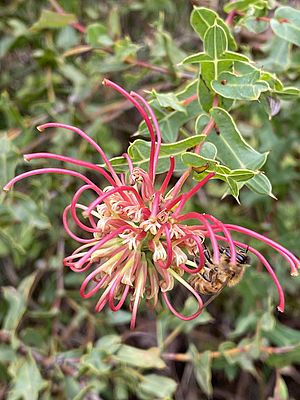 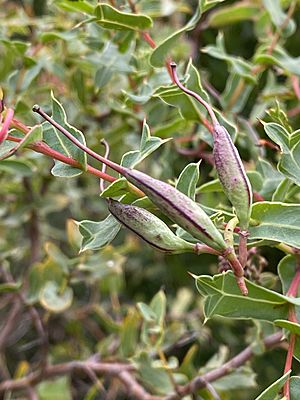 Grevillea maccutcheonii, commonly known as McCutcheon's grevillea, is a rare shrub in the family Proteaceae. It is endemic to south-western Western Australia, where only 7 mature plants remain in the wild. It usually grows to 2 metres in height and width The distinctively-shaped leaves are stem clasping with 3 rounded lobes, each tipped with a spine. The flowers, which have a reddish green perianth and a red style, appear predominantly between July and November in the species' native range, but may appear sporadically throughout the year.

The species was first formally described in 1996. In the Flora of Australia (1999), the species was positioned within the genus Grevillea by means of a hierarchical tree as follows:

The species is restricted to the foot of the Whicher Range to the south-east of Busselton.

All content from Kiddle encyclopedia articles (including the article images and facts) can be freely used under Attribution-ShareAlike license, unless stated otherwise. Cite this article:
Grevillea maccutcheonii Facts for Kids. Kiddle Encyclopedia.