It grows as a shrub from half a metres to two metres tall. It has angular, ridged branchlets and oval shaped leaves one to five centimetres long and two to nine millimetres wide.long, straight leaves from three to twelve centimetres long, and one to five millimetres wide. Flowers are pink; as with other Grevillea species, they occur in an inflorescence of many flowers. 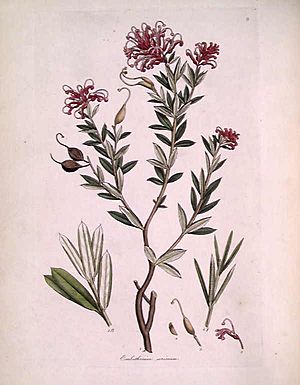 Embrothium sericeum, as illustrated in A Specimen of the Botany of New Holland

The species was first formally described in James Edward Smith's 1793 A Specimen of the Botany of New Holland as Embothrium sericeum var. minor. In 1810, Robert Brown transferred it into Grevillea as G. sericea.

The species is widespread in New South Wales, occurring from south of Sydney inland to Mudgee and north to Toronto and Wyee.

All content from Kiddle encyclopedia articles (including the article images and facts) can be freely used under Attribution-ShareAlike license, unless stated otherwise. Cite this article:
Grevillea sericea Facts for Kids. Kiddle Encyclopedia.