Newport Guildhall is a large timber-framed Guildhall (assembly building) in Newport, Shropshire, England. It is one of the few timber-framed buildings that remain in the town after a disastrous fire in 1666. 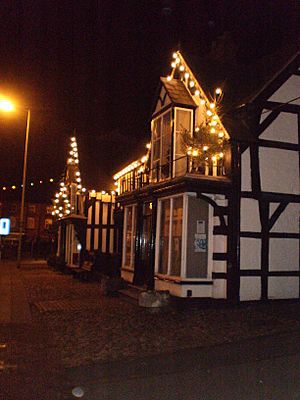 The site has been used for administration purposes since Anglo-Saxon times, when the area was known as the Bodlac or Place of Edicts. Later it was known as the Moot and then the Common Hall and it is now the home of the Newport town council. Space in the building has seen varied uses through the years, including inns, small shops, and including a current use as a wedding chamber (in the upper level). It also houses Newport's Visitor Information Centre, a display of heritage artefacts and a tea room.

The building was originally two separate structures sitting side-by-side. A 1557 remodel added a ground-level causeway to connect the two structures.

The building timbers have been dated by dendrochronology to 1486 and are particularly fine. The wind braces are pierced and cusped and form quatrefoils.
During renovations in 1911 the renovators discovered various Anglo-Saxon designs and artifacts.

The Guildhall, 1 & 3 High Street, is a Grade II* listed building. It is owned by the Boughey Trust and leased to the Newport Town Council for a peppercorn rent.

The restored building was officially opened by Algernon Heber-Percy on 25 March 1995, following its restoration by the Newport Town Council and the English Heritage. Architects Arroll & Snell of Shropshire provided the restoration design; the work was performed by William Onions Construction Ltd.

All content from Kiddle encyclopedia articles (including the article images and facts) can be freely used under Attribution-ShareAlike license, unless stated otherwise. Cite this article:
Newport Guildhall Facts for Kids. Kiddle Encyclopedia.