Kids Encyclopedia Facts
Not to be confused with Gulliver's World or Gulliver's Kingdom. 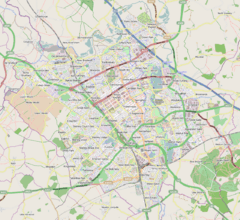 Gulliver's Land is a children's theme park in Milton Keynes, England. It opened in 1999 and is the third park to be opened by Gulliver's. (The other two parks are Gulliver's World and Gulliver's Kingdom). The park has been designed especially for families. The Adventurers Village is now part of the resort, providing themed accommodation and short break packages. Gulliver's Land resort includes Splash Zone, Blast Arena, The SFEAR and Dinosaur and Farm Park.

Gulliver's Land features a number of classic theme park rides, attractions and shows for children aged 2 to 13. A JCB Zone was introduced in 2017, launched in partnership with JCB. The themed area gives children the opportunity to experience JCB themed rides and attractions.

Gulliver's Land is typically open from February until Christmas.

The theme park has expanded over the years and now includes a selection of accommodation at the nearby Adventurers Village Resort. Accommodation types include cabins, lodges, dens and glamping tents. Accessible accommodation is now available, with the resort offering accessible lodges and tents. Short break packages include entry to the main theme park, splash zone and dinosaur and farm park. 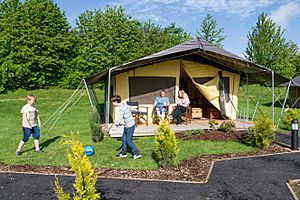 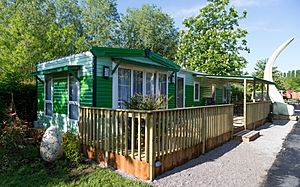 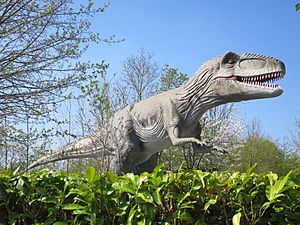 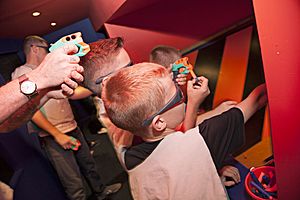 Blast Arena at Gulliver's Land is one of three official Blast Arenas operated by Gulliver's. The other two are located at Warrington, Cheshire and Matlock Bath, Derbyshire. Blast Arena goggles, vest and blaster are provided to each participant. Blast Arena is suitable for children aged 6 and over. The attraction is completely indoors with birthday party packages being a popular product.

The Blast Arena centre is located within Dinosaur and Farm Park, close to Splash Zone and The SFEAR.

One of the first standalone attractions at Gulliver's Land, Splash Zone is a water playground situated indoors. There is no standing water, the splash area consists of water play elements such as cannons, sprays and most notably a giant tipping bucket. 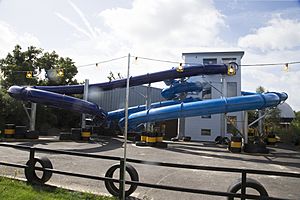 In Summer 2017 the Splash Zone attraction launched 3 new waterslides. Targeted towards older children the slides have a height restriction of 1.0 metre (3 ft 3 in).

All content from Kiddle encyclopedia articles (including the article images and facts) can be freely used under Attribution-ShareAlike license, unless stated otherwise. Cite this article:
Gulliver's Land Facts for Kids. Kiddle Encyclopedia.