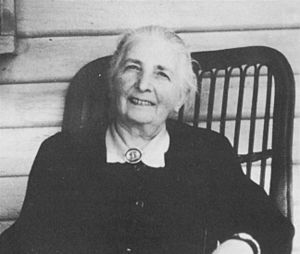 Hélène Monastier (2 December 1882 in Payerne - 7 March 1976 in Lausanne) was a Swiss teacher. She was a well-known person of the Christian Socialists, the International Civil Service and the Religious Society of Friends in French-speaking Switzerland.

Hélène-Sophie Monastier was born in Payerne. She studied at the Vinet School. She trained as a teacher in Germany, in Lausanne, and in England.

Hélène Monastier was a teacher at the Vinet School from 1904 to 1943. From 1905, she also gave lessons to young apprentices and workers at the Maison du Peuple. She met Christian socialists during a Paul Passy conference in Lausanne, and helped to create a local group. In 1914, she became the first president of the Federation of French Christian Socialists. She participated in May day processions.

During the First World War, she became friends with Leonhard Ragaz and Clara Ragaz. In 1917, she met Pierre Ceresole . She worked closely with him until his death in 1945, participating in the creation of the Voluntary Civil Service which became the International Civil Service (SCI) . She is "the most active, the most assiduous and the most convinced of collaborators" of the SCI. In the 1940s she was its international president. She participated in the Vaumarcus camps (Center for meetings, training and vacations of the Christian Unions of young people). In 1932, she became a member of the Société des Amis, (Religious Society of Friends).

In 1954-1955, she helped found the Lausanne committee for Swiss aid to non-European regions, which became Helvetas.

All content from Kiddle encyclopedia articles (including the article images and facts) can be freely used under Attribution-ShareAlike license, unless stated otherwise. Cite this article:
Hélène Monastier Facts for Kids. Kiddle Encyclopedia.