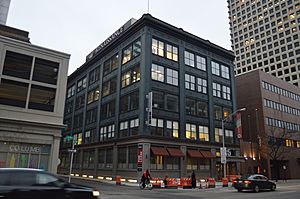 The company had its main factory at 347 W. Broad Street in the city's Franklinton neighborhood. At its height, it produced shoes in six locations around Columbus. The H.C. Godman Co. Building, located in Downtown Columbus, was listed on the National Register of Historic Places in 2018.

All content from Kiddle encyclopedia articles (including the article images and facts) can be freely used under Attribution-ShareAlike license, unless stated otherwise. Cite this article:
H.C. Godman Co. Facts for Kids. Kiddle Encyclopedia.