HUGE Improv Theater is a Minneapolis theater founded in 2005 dedicated to long form improvisational theater. The non-profit theater acquired its own building in 2010, where it runs scheduled nightly improv performances and hosts several annual improv festivals. HUGE announced plans to move into a new space by 2020 following a controversy over its landlord's support of David Duke's 2016 campaign for a U.S. Senate seat in Louisiana. 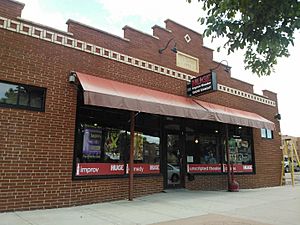 In 2005, HUGE was founded as a non-profit arts organization dedicated to long form improvisational theater, the only of its kind in Minneapolis. Butch Roy, Nels Lennes, Jill Bernard, and later Molly Chase, were responsible for the theater's creation. While performing at such local venues as Intermedia Arts, it was not until half a decade after the theater's founding, in December 2010, that the organization got its own building, located on Lyndale Avenue and designed in part by local architecture firm Shelter, featuring a wall with the word 'HUGE' emblazoned on it separating the lobby from the theater space.

In August 2017, a story in City Pages reported that HUGE's landlord, Julius Jaeger De Roma, had donated $500 to former Ku Klux Klan leader David Duke's 2016 campaign for a U.S. Senate seat in Louisiana. Upon this revelation, HUGE's board of directors denounced De Roma and began conversations about moving the theater to a new space. In May 2019, HUGE announced a capital campaign to fund the eventual purchase of its own facility. 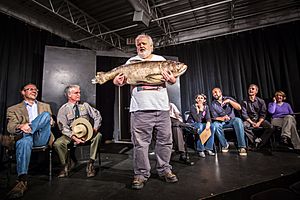 A show on HUGE's stage

HUGE runs improv shows six nights per week. The theater also hosts classes for beginning improv students and workshops for more advanced improvisational storytellers. HUGE is the site of the annual Twin Cities Improv Festival, a creation of the theater's staff designed to increase the presence of improvised theater in the Twin Cities. It was one of the Minnesota Fringe Festival's stages for the late-summer performing arts festival from 2011 through 2017.

All content from Kiddle encyclopedia articles (including the article images and facts) can be freely used under Attribution-ShareAlike license, unless stated otherwise. Cite this article:
HUGE Improv Theater Facts for Kids. Kiddle Encyclopedia.