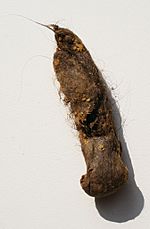 A hairball is a small collection of hair or fur formed in the stomach of animals that is occasionally vomited up when it becomes too big. Hairballs are primarily a tight elongated cylinder of packed fur, but may include bits of vomit or recently swallowed food. Cats are especially prone to hairball formation since they groom themselves by licking their fur leading to hair going into the stomach. Rabbits are also prone to hairballs because they groom themselves in the same fashion as cats, but hairballs are especially dangerous for rabbits because they can't vomit them. Because the digestive system of a rabbit is very fragile, rabbit hairballs must be treated immediately or they may cause the animal to stop feeding and, ultimately, die by dehydration. 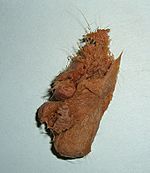 Cattle are also known to accumulate hairballs, but, as they do not vomit, these are found usually after death and can grow quite large.

Although uncommon in humans, some hairballs have been reported. Hairballs can be quite hazardous in humans, since hair cannot be digested or passed by the human gastrointestinal system, and even vomiting may be ineffective at removing the hair mass. This can result in the clogging of the digestive system.

All content from Kiddle encyclopedia articles (including the article images and facts) can be freely used under Attribution-ShareAlike license, unless stated otherwise. Cite this article:
Hairball Facts for Kids. Kiddle Encyclopedia.