Hakea gibbosa, commonly known as hairy hakea or needlebush hakea, is a shrub of the family Proteaceae and is endemic to south eastern Australia. It has very prickly foliage, cream-yellowish flowers from April to July, and provides shelter for small birds. It has become an environmental weed in South Africa and New Zealand, where it had been introduced for use as a hedge plant. 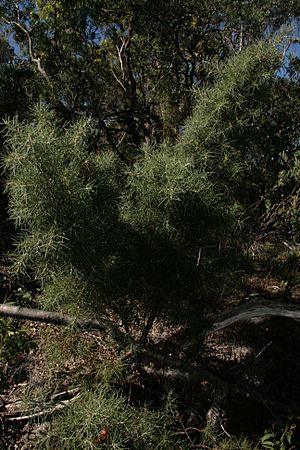 The species was first described by James Edward Smith who named the species Banksia gibbosa in 1790. In 1800 the Spanish taxonomic botanist Antonio José Cavanilles gave it its current name. The British botanist Richard Anthony Salisbury had given it the name Banksia pinifolia in 1796, upon which Joseph Knight based his name and reallocated it to Hakea as the pine-leaved hakea (H. pinifolia) in his controversial 1809 work On the cultivation of the plants belonging to the natural order of Proteeae.

Plants found in Queensland which were classified as this species have been renamed as a new species Hakea actites.

Hakea gibbosa is a Category 1 Plant on the Declared Weeds & Invaders list for South Africa. It has become naturalised in northern parts of North Island in New Zealand. 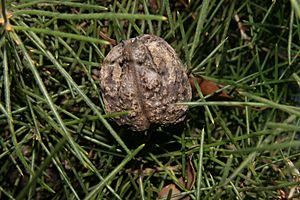 Small birds use the prickly foliage as shelter. The seeds are eaten by the Yellow-tailed Black Cockatoo.

Hakea gibbosa adapts readily to cultivation and is easy to grow with good drainage and a sunny aspect, though its prickly foliage may be a deterrent.

The gum was investigated for use in sustained-release tablets in 1999.

All content from Kiddle encyclopedia articles (including the article images and facts) can be freely used under Attribution-ShareAlike license, unless stated otherwise. Cite this article:
Hakea gibbosa Facts for Kids. Kiddle Encyclopedia.