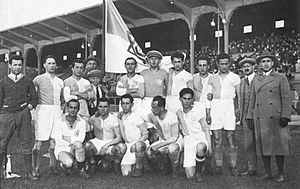 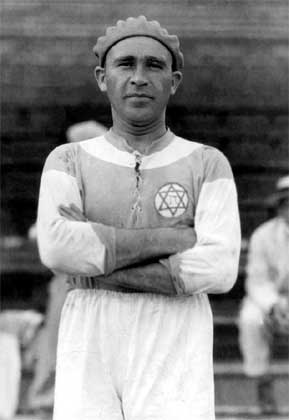 S.C. Hakoah Wien was a football club which played in Austria. The club was part of the Jewish sports club Hakoah (Hebrew-the strength)which is still existing.

The club was founded in 1909. In its first year, the club's athletes competed in fencing, football, field hockey, track & field, wrestling and swimming. It was one of the first team which travelled around the world to play matches. Therefore Hakoah Vienna had supporters under Jews in many countries of Europe. One of them was the author Franz Kafka.

Hakoah was one of the best football clubs in Austria before the Second World War. The club was the first from the continent which was able to defeat an English club on the island (Westham United-Hakoah Vienna 0 : 5) and on Juli 15th, 1917 goalkeeper Willy Halpern was the first Hakoahplayer in the nationalteam. 1919 Hakoah reached the first class. 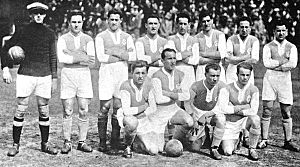 In the 1924/25 season Hakoah Vienna became Austrian Champion. In 1926 the club made a tour to the United States and played in New York where they had 46 000 spectators. This was a record for this time. Impressed by the relatively lack of antisemitism and good payment half of the team stayed in the USA. In New York some players formed the New York Hakoah. Others went to Palestine and founded Hakoah Tel Aviv. This led to the relegation into the second class. In the 1937/38 season they were leaders but the occupation of Austria by Germany led to the cancellation of all matches. Like all other Jewish sportsclubs Hakoah Vienna was dissolved during the time of Nazioccupation and lost all their properties. From the football players of Hakoah Oskar Grasgrün, Ernst Horowitz, Josef Kolisch, Erwin, Oskar Pollak, Max Scheuer and Ali Schönfeld were murderd by the Nazis. Fritz Weinberger und Julius Zwickler were murderd in concentration camps. Many of the players who were able to left Austria went to Palestine and played for Hakoah Tel Aviv.

1945 the club was renewed.The football team, which played in the second division of the Austrian championship after World War II, was dissolved in 1949. Under the name SC Maccabi Wien the club is now playing in a minor league.

One of the notable players of Hakoah Vienna was Béla Guttmann, who played for Hakoah from 1922 to 1926 and after the end of his career he became manager in Italy, South America and Europe.

All content from Kiddle encyclopedia articles (including the article images and facts) can be freely used under Attribution-ShareAlike license, unless stated otherwise. Cite this article:
S.C. Hakoah Wien Facts for Kids. Kiddle Encyclopedia.