Kids Encyclopedia Facts
This page is about the children's game. For the Happy End song, see Kazemachi Roman. 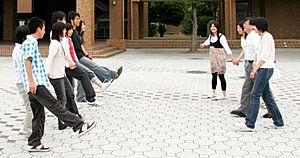 A game of Hana Ichi Monme

Hana Ichi Monme (花一匁) is a traditional Japanese children's game. The game is similar to the game Red Rover in the Western world, and is often played in kindergartens and elementary schools.

The name "Hana Ichi Monme" means "a flower is one monme", where a monme is a historical (Edo period) Japanese coin with a value of 3.75 grams of silver.

Other traditional Japanese children's games include Kagome Kagome and Dahrumasan ga Koronda. Many games have songs that go with them.

Players split into two groups, and the members of each group hold hands, so that the teams face each other in two lines. One group steps toward the other in the rhythm of a song that is used only for the game, and the other steps back so that the team lines remain parallel. In each phrase of the song, the team that is stepping back changes, and the team creates a move that associates a swing.

Each time the song ends, the team leaders step forward and do janken, a Japanese version of rock paper scissors. The winner goes back to his team, and they discuss who the team wants to add from the other team. After they have decided, they sing another song doing the same movement and announce the person they want. The game ends when one team loses all of its members.

In this variant, the two teams sing alternate lines from a song when advancing. As the word monme is sung, that team kicks into the air as if to kick the dirt into the opponents' faces.

The children then huddle to choose a person from the opposing team and return in line to call out:-

The two named children then step forward to janken. The loser joins the winning team's line. The game ends the same way.

All content from Kiddle encyclopedia articles (including the article images and facts) can be freely used under Attribution-ShareAlike license, unless stated otherwise. Cite this article:
Hana Ichi Monme Facts for Kids. Kiddle Encyclopedia.