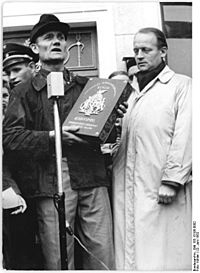 Hans Gericke (27 July 1912 – 15 February 2014) was a German architect and urban planner. From 1953 to 1958, he was the deputy director of the Institutes für Theorie und Geschichte der Baukunst for the Deutschen Bauakademie. In 1965, he became the chief architect of East Berlin, East Germany (now Berlin, Germany). For his work, he was awarded by many different organisations. He was born in Magdeburg, Saxony-Anhalt, German Empire.

All content from Kiddle encyclopedia articles (including the article images and facts) can be freely used under Attribution-ShareAlike license, unless stated otherwise. Cite this article:
Hans Gericke Facts for Kids. Kiddle Encyclopedia.