Happy Valley Shanghai (Chinese: 上海欢乐谷) is an amusement park in Songjiang, Shanghai, People's Republic of China. The park is about 40 kilometers (25 miles) from downtown Shanghai. It covers an area of 863,500 square meters (213 acres). Happy Valley contains seven big areas, each with different themed zones, including Sunshine Beach, Happy Times, Typhoon Bay, Gold Mine Town, Ant Kingdom, Shanghai Beach and Shangri-la Woods. There are more than 100 rides in the park.

The park was opened on August 16, 2009. In the beginning of the park's operation, many people didn't like it because of long waiting times and being dangerous. Most of the rides were broken, the lines were too long, and many people were hurt not only from riding the rides, but from walking around the park. Three people were hurt when a big sign board fell on top of them.

The park currently has six roller coasters. Five of them were opened when the park began its operation while the mine train coaster opened in October 2009. 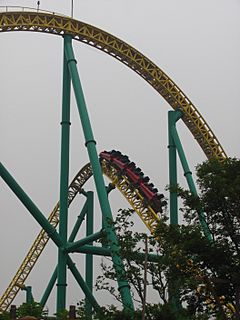 All content from Kiddle encyclopedia articles (including the article images and facts) can be freely used under Attribution-ShareAlike license, unless stated otherwise. Cite this article:
Happy Valley Shanghai Facts for Kids. Kiddle Encyclopedia.