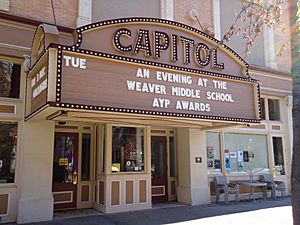 Commercial Savings and Loan was the first building located at 382 Second Street. It was built in 1897, but closed shortly after. In 1900, Strong Shoe Company purchased the building and resided there for 15 years. According to the Macon Daily Telegraph, the Cox was converted into a movie theater in 1917 and was officially opened to the public." In 1917, The Capitol Theatre became the first public venue to offer air conditioning. After 58 years, the Capitol Theatre closed in 1975. The venue reopened in 2006 as a movie house and concert venue. In 2013, The Moonhanger Group – owners of downtown dining favorite The Rookery, beloved H&H Restaurant, and acclaimed farm-to-table restaurant Dovetail – entered a long-term management agreement with the Theatre. On January 5, 2018 Hargray Communications became the new venue sponsor for The Capitol Theatre.

A man named Tony Long had a vision for downtown Macon, Georgia. He led a group of people and launched a $1.2 million renovation to restore the Cox Theatre. According to Kap Stann's book called "Moon Georgia," the Capitol Theatre reopened in 2006 as the Cox Capitol Theatre as a live entertainment venue.

The Theatre serves as Macon's venue for: concerts, from rock bands to first-class musical tours; second-run movies, such as vintage and independent films; and film festivals.

Today the theatre works hard to support events that will continue the rock n roll music legacy of Macon, Ga. One of the largest events sponsored and held at the Cox Capitol Theatre is the Bragg Jam Music Festival. This late summer festival brings in bands from all over the country on top of supporting local artists.

The Hargray Capitol Theatre serves as a rental space for events such as receptions, parties and fundraisers. 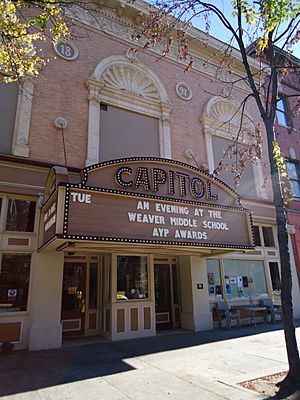 The Hargray Capitol Theatre has an open floor plan on the bottom level. Their second level features a balcony with seating for 297. This gives the theatre an overall capacity of 650.

All content from Kiddle encyclopedia articles (including the article images and facts) can be freely used under Attribution-ShareAlike license, unless stated otherwise. Cite this article:
Hargray Capitol Theatre Facts for Kids. Kiddle Encyclopedia.