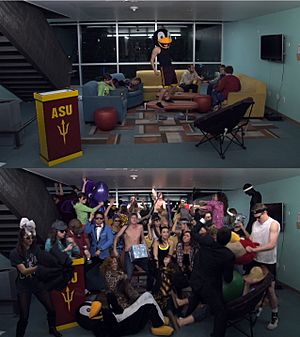 The Harlem Shake is an Internet meme that became popular in February 2013. It started with a video by a YouTube user named Filthy Frank. The trend spread with people trying to replicate the video. The videos feature the song Harlem Shake by electronic musician Baauer, and a dance. Normally, each video begins with one person (often wearing a mask) dancing to the song alone, surrounded by other people who seem to be unaware of the person dancing. When the bass drops, the entire crowd starts doing the dance. The video tends to be 30 seconds long.

Several reports have compared the Harlem shake to the Gangnam Style meme that was popular during 2012.

All content from Kiddle encyclopedia articles (including the article images and facts) can be freely used under Attribution-ShareAlike license, unless stated otherwise. Cite this article:
Harlem Shake Facts for Kids. Kiddle Encyclopedia.