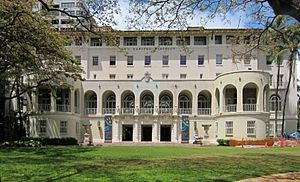 The No. 1 Capitol District Building, on the site of the former Armed Services YMCA Building, now houses the Hawaiʻi State Art Museum and the Hawaii State Foundation on Culture and the Arts.

While they were both in the cabinet, under King Kamehameha V, American politicians John Mott-Smith and Charles Coffin Harris convinced the legislature to fund a hotel. It first opened in 1872. The hotel was converted to a YMCA in 1917 and used by the military in World War I. In 1926 the termite-infested building was finally torn down, and a new one designed in Spanish mission style by Lincoln Rogers of the firm Emory & Webb.

The new building was dedicated on March 16, 1928. The two-story U-shaped building includes a swimming pool in its courtyard. It is located at , 250 South Hotel Street, Honolulu, Hawaii. Across Richards Street is the Hawaii State Capitol building. The area was added to the National Register of Historic Places listings in Oahu as the Hawaii Capital Historic District on December 1, 1978.

The Hawaiʻi State Art Museum is operated by the Hawaii State Foundation on Culture and the Arts, and is located on the second floor of the No. 1 Capitol District Building. Admission is free at all times.

The museum consists of three galleries. In addition to changing temporary exhibitions, there is a permanent display of Hawaiian art. It reflects a mix of Hawaii's ethnic and cultural traditions through 132 works of art by 105 artists. In a wide variety of artistic styles, movements, and media, the exhibition illustrates the varied cultural influences that fuel the creativity of Hawaii's artists.

All content from Kiddle encyclopedia articles (including the article images and facts) can be freely used under Attribution-ShareAlike license, unless stated otherwise. Cite this article:
Hawaii State Art Museum Facts for Kids. Kiddle Encyclopedia.