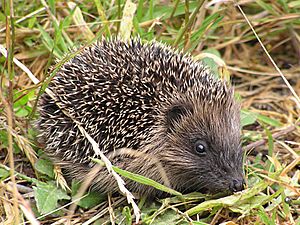 European hedgehogs were brought to New Zealand by European colonists in the 1870s to remind them of their homeland. They have now spread throughout the country, being absent only in inhospitable environments. The general public has a benign attitude to them but conservationists and regional councils regard these animals as pests as they prey on native animals and compete with them for food.

Discussions on importing hedgehogs into New Zealand began as early as 1868. The first recorded introductions of the European hedgehog (Erinaceus europaeus occidentalis) were by the Canterbury Acclimatisation Society in 1870, with subsequent introductions in 1871, 1885, 1890 and 1894. It is likely that they all came from Britain.

Beyond acclimatisation, hedgehogs were also introduced to control garden pests such as slugs, snails and grass grubs.

Throughout much of the 20th century New Zealand-born hedgehogs were liberated in many parts of the country, from those few animals, hedgehog numbers increased dramatically. In the 1920s hedgehogs were so numerous that they were blamed for reducing the tally of small game birds and a bounty was put on their noses. By the 1950s hedgehog numbers reached their maximum. To judge by roadkill figures, hedgehogs were 50 times more numerous in New Zealand than anywhere else. Since the 1950s, their numbers have fallen but over large parts of New Zealand hedgehogs are still more numerous than in Britain.

By 1972 they may have reached their maximum range. Today hedgehogs are present in almost all habitats, including urban, rural, braided river and forests areas. The few areas they are not present in are inhospitable environments like above the permanent snow line and in the wettest parts of Fiordland. 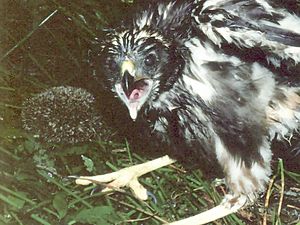 Since coming to New Zealand the hedgehog has grown a little smaller and never reaches the size or weight of animals in Britain and continental Europe. This is because European animals must reach a larger size and greater weight to survive the 6 month long period of hibernation. In central and southern New Zealand, hedgehogs hibernate for about three months of the year but few hibernate at all in the warmer northern parts of the country.

Wild pigs, dogs, cats are predators of the hedgehog, and the flightless, endemic weka and Pukeko will prey on nestlings. The Australasian harrier hawk scavenges road killed hedgehogs (along with anything else killed on the roads), but it is unknown whether they actively prey on them. 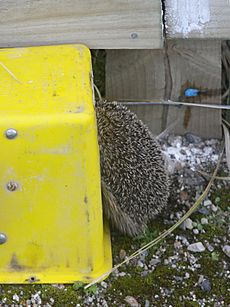 Hedgehog caught in a Timms trap

Many people have a benign attitude to these introduced predators who eat garden pests, and a few have implemented hedgehog rescue efforts.

Following studies, the Department of Conservation (DOC), regional and local councils have now recognised the damage hedgehogs cause and now actively attempt to manage their population. 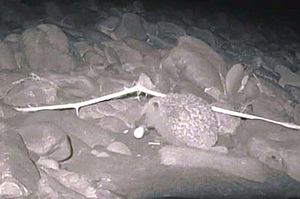 Hedgehogs prey on the endangered, endemic giant snails (Powelliphanta), the endemic wētā species, and various other native invertebrates. The critically endangered Cromwell chafer beetle (Prodontria lewisi) is threatened due to predation by hedgehogs as well as other introduced species.

Their diet includes the eggs and chicks of ground-nesting birds, so they may have already contributed to the decline and extinction of up to fifteen bird species and are a threat to those that remain. Also they are yet another threat to endangered native skinks.

Hedgehogs are therefore humanely controlled in many parts of New Zealand. DOC says on its website "You can help stop hedgehogs, don’t encourage them into your backyard by creating burrows for them or leaving milk out. Set a suitable trap for the situation you are in (suburban or rural)." and goes onto describe the trapping systems recommended which are kill traps.http://www.doc.govt.nz/nature/pests-and-threats/animal-pests/hedgehogs/ 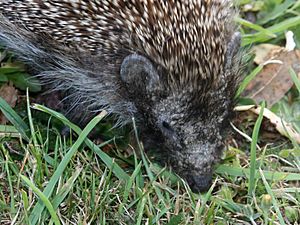 In Europe hedgehogs carry a large number of the hedgehog flea (Archaeopsylla erinacei). But it appears that none survived the six-month voyage to New Zealand in the 19th century, so the New Zealand animals are free of fleas. But they suffer from another ectoparasite - mange mites (Caparinia tripilis) which are environmental and are not hedgehog exclusive. These mites bury their eggs in the skin where they later hatch and cause many health issues for the hedgehog host. The parasite blinds and kills large numbers of hedgehogs and probably played a big role in reducing their numbers. These are the same mites that may be carried by domesticated cats and dogs, and are environmental mites.

All content from Kiddle encyclopedia articles (including the article images and facts) can be freely used under Attribution-ShareAlike license, unless stated otherwise. Cite this article:
Hedgehogs in New Zealand Facts for Kids. Kiddle Encyclopedia.