Kids Encyclopedia Facts
This page is about the district of Bristol, England. For other places of the same name, see Henbury (disambiguation).

Henbury is a suburb of Bristol, England, approximately 5 miles (8.0 km) north west of the city centre. It was formerly a village in Gloucestershire and is now bordered by Westbury-on-Trym to the south; Brentry to the east and the Blaise Castle Estate, Blaise Hamlet and Lawrence Weston to the west. To the north lie the South Gloucestershire village of Hallen and the entertainment/retail park Cribbs Causeway.

The Hazel Brook (also known as the Hen), a tributary of the River Trym, flows through Henbury and crosses Henbury Road in a small ford near The Henbury Arms carvery restaurant. The ford is more than a foot deep relatively often and a small bridge exists as a main route for motor vehicles a few metres away.

Henbury is also the name of a council ward for Bristol City Council that includes both Henbury and Brentry.

Henbury was first mentioned in 692 as Heanburg. The name is from the Old English hēan byrig, meaning 'high fortified place'. It was mentioned in the Domesday Book as Henberie.

Henbury was historically a very large parish. It extended to the River Severn and included King's Weston, Lawrence Weston, Charlton, Easter Compton, Pilning, Northwick and Aust. When the civil parish was created in 1866, parts of the ancient parish were separated to form the civil parishes of Redwick and Northwick (later Pilning and Severn Beach) and Aust.

Botany Bay is an old name for the area of Henbury centred on the modern Marmion Crescent believed to derive from the nineteenth century name of a row of cottages. The Great House, Henbury was the home of the Astry family, and of Scipio Africanus (see below). Nearby Henbury Court was built by Thomas Stock to replace the Great House. Henbury Court was demolished in the 1950s. 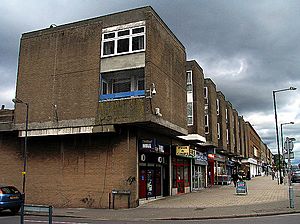 Henbury Leisure Centre is home to a 25-metre swimming pool, fitness suite, full-size all-weather pitch and a variety of fitness programmes and classes. It is located on the site of Henbury Secondary School.

The Henbury Lodge Hotel is operated by Best Western. The building itself is believed to have been built around 1600 as two cottages, before being combined into one dwelling in 1712.

Henbury provides good access to major trunk roads such as the A4018, M4 and M5 motorways. It is located approximately two miles away from M5 junction 17 and five miles from the M4/M5 interchange. Britol city centre is approximately five miles south east of Henbury.

Henbury station on the Henbury Loop railway between St Andrews Road and Filton Junction was opened in 1910 and closed in 1964. The station is scheduled to reopen in 2021 as part of MetroWest's Phase Two, with trains calling at Bristol Temple Meads railway station.

All content from Kiddle encyclopedia articles (including the article images and facts) can be freely used under Attribution-ShareAlike license, unless stated otherwise. Cite this article:
Henbury Facts for Kids. Kiddle Encyclopedia.