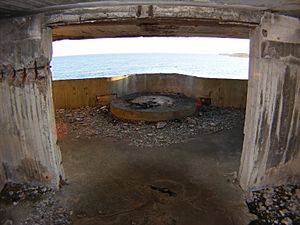 The Henry Head bunker is found on the La Perouse side of the inlet to Botany Bay near the edge of a cliff that drops down into the ocean on Henry Head, La Perouse, New South Wales, Australia.

This fort and bunker building was built in-between 1892 - 1895 with a large disappearing gun emplacement (a special hole in the ground that the cannon shoots from and then disappears into). The fort was used until 1910, upon which the fort became useless.

The fort that had 2 six inch gun emplacements and special lookout positions was reused during World War II to protect the entrance to Botany Bay. The underground bunker and tunnels inside the fort had vaulted weapons storage rooms with double walls and ceilings. The doubling up of walls and ceilings was a special way of stoppng the walls from collapsing if the fort suffered a direct hit from a missile (rocket) fired from an enemy ship. The battery is currently not in use.

All content from Kiddle encyclopedia articles (including the article images and facts) can be freely used under Attribution-ShareAlike license, unless stated otherwise. Cite this article:
Henry Head Battery Facts for Kids. Kiddle Encyclopedia.