The Herndon Monument on the grounds of the U.S. Naval Academy is a 21-foot-tall (6.4 m) grey granite obelisk. It was erected in memory of Captain William Lewis Herndon, who courageously decided to go down with his ship, SS Central America, and the men left aboard rather than save himself on September 12, 1857. All women and children and many of the men aboard were saved by a nearby ship during the storm. 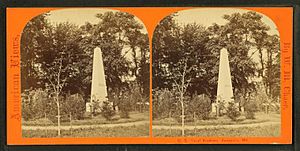 On the monument's base, facing the Naval Academy Chapel, is a plaque:

In command of the Central America, home-bound with California gold
seekers, Captain Herndon lost his life in a gallant effort to save
ship and lives during a cyclone off Hatteras, September 12, 1857.

"Forgetful of self, in his death he added a new glory to the annals of the sea" - Maury 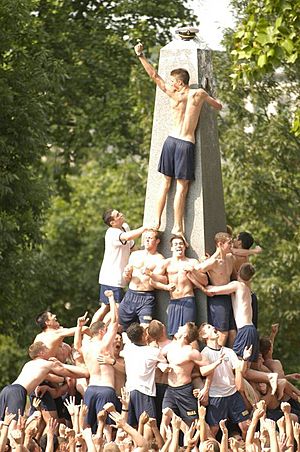 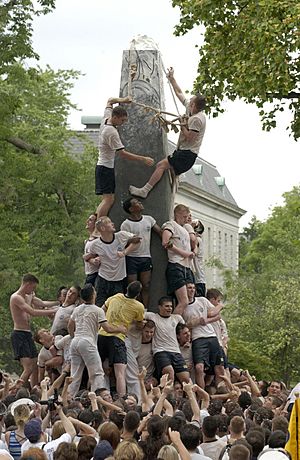 The climbing of the monument by Fourth Class Midshipmen.

It is the site of the famous "plebes-no-more" ceremony, where the plebes (first-year students at the academy) all work together to climb the greased monument and replace a plebe "dixie-cup hat" on top with a combination cover. This is the official end of the plebe year.

It is a Naval Academy tradition that the midshipman who replaces the dixie cup hat will be given the Superintendent's combination cover. Legend says that he or she will be the first of his or her class to make Flag Rank, although in reality, this has not yet occurred.

The academy began recording times in 1959. In 1962 Midshipman 4th Class Ed Linz scaled the monument with the aid of a cargo net. Using such devices is now banned.

The record was set in 1969 when Midshipman Larry Fanning made the climb in 1 minute and 30 seconds. However, the monument was not greased.

Midshipman 4th Class Michael J Maynard of the Class of 1975 scaled the monument in 20 minutes in 1972, believed to be the fastest time since the tradition of greasing the monument began.

The 2010 Herndon Monument climb for the Class of 2013 took place on Monday, May 24, 2010 at 1:30pm. Superintendent Vice Admiral Jeffrey Fowler indicated dissatisfaction that year with the risk of injury associated with the climbing tradition and a desire to discontinue it. Vice Adm. Fowler ordered the Brigade of Midshipmen not to slather the monument with lard "to improve the safety of the event." However, his successor, Vice Admiral Michael Miller, reinstated the tradition in 2011, citing that "[c]onducting the ceremonial climb in the same manner as so many previous classes helps to instill spirit and camaraderie among plebes and better links them to the many classes that have gone before them. The Herndon Monument climb serves as a useful event in reinforcing teamwork, organization and leadership."

All content from Kiddle encyclopedia articles (including the article images and facts) can be freely used under Attribution-ShareAlike license, unless stated otherwise. Cite this article:
Herndon Monument Facts for Kids. Kiddle Encyclopedia.