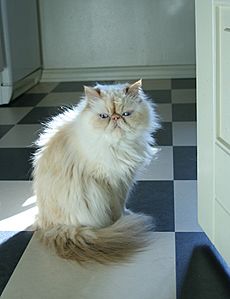 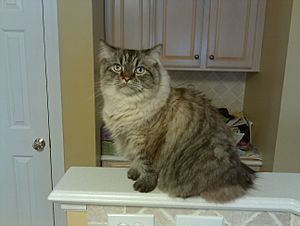 The Himalayan is a cat breed that was originally made by crossing the Siamese and the Persian. It has point markings and blue eyes like a Siamese, and long fur like a Persian. Sometimes it is considered to be a color variation of the Persian, and not a separate breed. 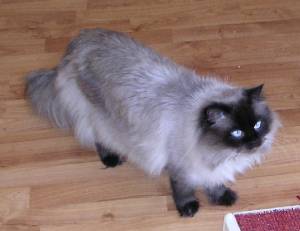 Like Persians more generally, the Himalayan tends to have a round (cobby) body with short legs, which makes it harder for them to jump as high as other cats do. Since the 1960s, however, some have more of a Siamese-like body, and thus do not have this limitation, but may not be acceptable as show cats, depending on the specific breed standards of the organisation in question.

As with other Persians, there are two types of Himalayans, the traditional or doll-face, and the peke-faced or ultra-typed which has the more extreme squashed-looking facial features. The seal-point Himalayan in the photo to the left is doll-faced while the chocolate-point in the title image is peke-faced.

The bulk of the fur on the body of a Himalayan is white or cream, but the points come in many different colors: Seal (or Black), Blue, Lilac, Chocolate, Red (Flame), and Cream. The points can also be Tabby, Lynx, or Tortoiseshell-patterned.

The Chocolate and Lilac point Himalayans are the most difficult to produce, because both parents must carry the gene for Chocolate/Lilac to produce a Chocolate or Lilac kitten, as the trait is autosomal recessive. 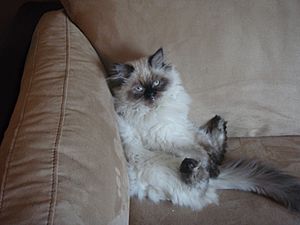 These cats are sweet-tempered, intelligent, and generally very social and good companions. Because of their heritage from the Siamese cats, they tend to be more active than Persians.

Himalayans are good indoor companion animals. By and large, they are gentle, calm, sweet-tempered, and they possess a playful side as well. Like the Siamese, Himalayans love to play fetch, and a scrap of crumpled paper or a kitty toy will entertain them for hours. Himalayans are devoted and dependent upon their humans for companionship and protection. They crave affection and love to be petted and groomed.

All content from Kiddle encyclopedia articles (including the article images and facts) can be freely used under Attribution-ShareAlike license, unless stated otherwise. Cite this article:
Himalayan (cat) Facts for Kids. Kiddle Encyclopedia.