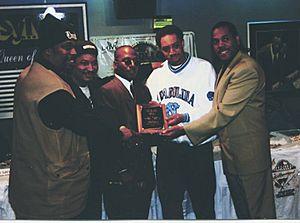 The Hip Hop Hall of Fame Museum was to be funded by the Hip Hop Hall of Fame Awards TV Shows after broadcasting on BET, produced with Juanita Williams of Dove Entertainment in the mid 1990s, modeled after the Rock n Roll Hall of Fame model. However, due to the media-hyped artist beefs that led to the tragic deaths of Tupac Shakur and the Notorious BIG after the show broadcasts, the Hip Hop Hall of Fame + Museum lost advertisers and sponsorship clients and could not return to the airwaves during that era, putting the museum building plans on hiatus. The Hip Hop Hall of Fame also attempted a re-launch in Los Angeles in 1997 that featured Kurtis Blow, Prince Whipper Whip of the Fantastic Five, Grandmaster Caz of the Cold Crush Brothers, founder and executive producer James 'JT' Thompson, The Watts Prophets, The Legendary Actor - Rapper 'Dolemite', Dominique DiPrima of The Beat & KJLH Radio, and more film and television personalities, but the awards still could not return to television until 2014. 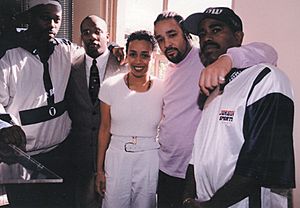 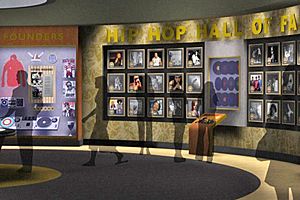 The new development project to house the Hip Hop Hall of Fame + Museum and a hotel entertainment complex is set to be built in a new Harlem location on 125th street. The 20-story facility as designed will include the actual Hall of Fame, a gift store, arcade, TV broadcast studios, a sports bar, restaurant and concert venue producing over 100 events annually. The Hip Hop Hall of Fame educational programming includes a youth arts and media training academy and will accommodate over 25,000 NYC public school kids on educational field trips and programs annually. The complex is scheduled for phase one in 2018. 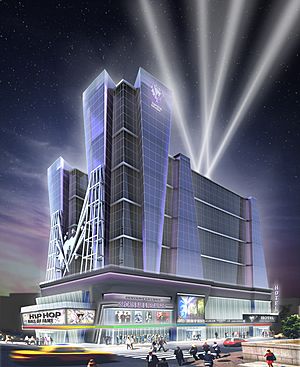 The Hip Hop Hall of Fame has held inductions in the 1990s on BET, and in 2014 from Stage 48 hosted by hip hop icon Roxanne Shante in NYC broadcast on Soul of the South TV network. The Hip Hop Hall of Fame holds its annual induction ceremony every November during Hip Hop History Month in New York City. Artists and culture element contributors are eligible for induction after 20 years from their initial record release, and contributors based upon merit and impact on hip hop music and culture that includes MCs, DJs, graffiti artworks, B-Boys/Girls dancers, executives, producers, labels, fashion, business, scholarship, and community.

All content from Kiddle encyclopedia articles (including the article images and facts) can be freely used under Attribution-ShareAlike license, unless stated otherwise. Cite this article:
Hip Hop Hall of Fame Facts for Kids. Kiddle Encyclopedia.