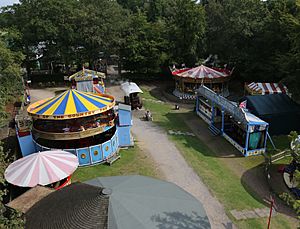 The Hollycombe Steam Collection is a collection of steam-powered vehicles, rides and attractions based near Liphook in Hampshire. The collection includes fairground rides, a display farm and two railways.

The collection dates back to the late 1940s when Commander John Baldock decided to preserve some of the steam traction engines that were rapidly disappearing from British life. By the early 1960s he had acquired a significant collection of road vehicles and started to collect fairground rides. In the late '60s he extended his interests again into preserving railway equipment.

The collection was eventually opened to the public and became a major Hampshire tourist attraction. At length the collection grew so large it became impossible for one person to maintain, and by 1984 Baldock decided he would have to close the operation. 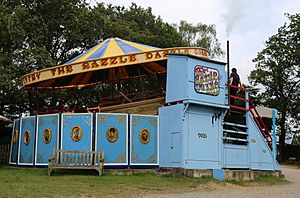 The Edwardian Fairground is a complete steam fair comprising rides originating from the 1870s and later. The rides include a Tidman 3 abreast Golden Gallopers roundabout, a single Steam Yacht a Razzle Dazzle being a grand aerial novelty ride with a rotating and tilting movement. S Fields Steam Circus was built between 1868 and 1872 and is the oldest surviving mechanically propelled fairground device. The fairground also has a set of Steam Swings, a Set of Walker Chair o planes, a big wheel and a Bioscope Show which is an early travelling cinema. The rides are constructed mainly from wood and, where appropriate, are powered by steam engines. There are rides for all ages and the atmosphere is completed with a number of fairground organs and a range of sidestalls.

The farm includes a wide range of vintage steam-powered farm equipment including: ploughing engines, a threshing machine, a baler, and a stationary steam engine driving small machinery through a line shaft.

The sawmill is used to cut much of the wood used on site and is powered by a large semi-portable Robey Steam Engine. Close by is the engine from the paddle steamer Caledonia.

There are two railways: narrow gauge and miniature railway. A third standard gauge line formerly operated but is now abandoned. 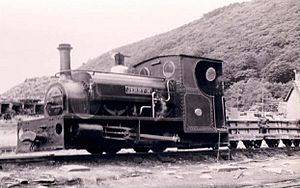 Jerry M running at Dinorwig before preservation at Hollycombe 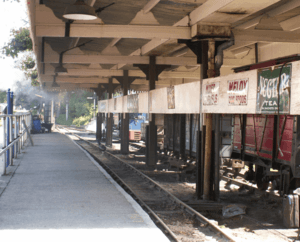 The narrow gauge railway at Hollycombe started in 1967 using equipment purchased from the Dinorwic slate quarry in north Wales. The quarry had recently abandoned its extensive internal rail system and Commander Baldock acquired the steam locomotive Jerry M along with a quantity of track and several wagons. Construction started in 1968 and reached the sandstone quarry by 1971. The 2 ft (610 mm) narrow gauge line was later extended to include a loop, which brought the track length to its present 1½ miles. The second steam locomotive Caledonia was purchased in 1968.

Four of the five passenger coaches were bought from the Ramsgate Cliff Railway when it closed; the fifth coach was built at Hollycombe to the same design.

The miniature railway starts at the station by the saw mill and climbs past crossing gates and through a cutting. It reaches the top and bends to the left. The fairground is on the left and the woodland gardens on the right. It then heads into another cutting before a 360 degree loop onto an embankment. It runs parallel with a 5-inch gauge line into the 2 platform station. 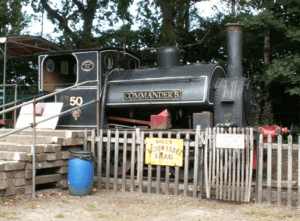 The standard gauge (4 ft 8+1⁄2 in (1,435 mm)) railway ran for ⅓ mile between the sawmill and the farm, passing the fairground along the way. The railway had one steam locomotive:

The collection has over 30 different steam engines of various types. Some of the engines are not on display as engines which in some cases are 100 years old require regular maintenance work to keep them in service.

Hollycombe has a large collection of traction engines and some are used on open days either to plough a field, work a threshing machine, give rides or work a fairground ride. 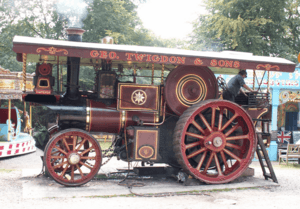 The showman's engines are used to power the fairground rides.

The light steam tractors (a small design of traction engine) are used for giving rides. 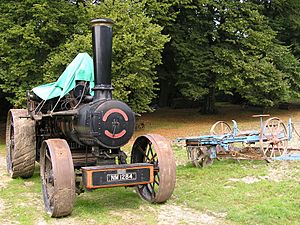 These engines are used for ploughing or driving a threshing machine. 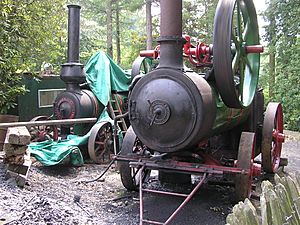 This type of engine was used for driving agricultural machinery.

All content from Kiddle encyclopedia articles (including the article images and facts) can be freely used under Attribution-ShareAlike license, unless stated otherwise. Cite this article:
Hollycombe Steam Collection Facts for Kids. Kiddle Encyclopedia.