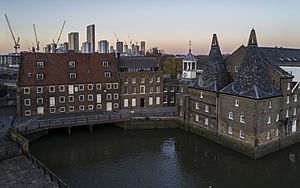 The House Mill from the mill basin. 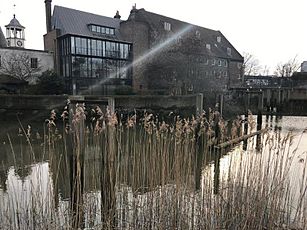 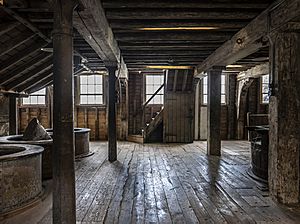 The House Mill is a major Grade I listed building on the River Lea in Mill Meads, and part of the Three Mills complex. The original tidal mills at this site date back to the Domesday book of 1086, and the present structure of the House Mill was built in 1776 by Daniel Bisson. It was damaged by fire in 1802, and then rebuilt by Philip Metcalfe.

It is one of only four Grade I listed buildings in the London Borough of Newham. The House Mill remains the "largest tidal mill standing in Britain", although the water wheels are not in operation.

The south facade of the House Mill displays a coat of arms dated 1776 and the initials "D S B" (which could be Daniel and Sarah Bisson), with forty cast iron wall plates which tie the ends of the floor beams.

The Miller's House was rebuilt in 1995 with a modern interior, but retaining the original facade. The Miller's House and a house on the other side of the House Mill were originally built for the Miller and his family. A Second World War bomb landed on a nearby bonded warehouse and damaged both houses on 15 October 1940 which were later demolished. The Mill stopped operating and was used as a warehouse. 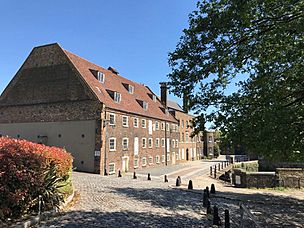 All content from Kiddle encyclopedia articles (including the article images and facts) can be freely used under Attribution-ShareAlike license, unless stated otherwise. Cite this article:
House Mill Facts for Kids. Kiddle Encyclopedia.