House of Vorontsov facts for kids 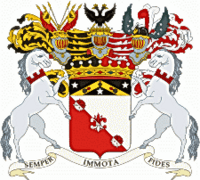 The arms of the Vorontsov family.

The House of Vorontsov, also Woronzow, Woroncow (Russian: Воронцо́в) is the name of a celebrated Russian family which were later given the rank of Count of the Holy Roman Empire in 1744 and became "Serene Princes of the Russian Empire" in 1852. During the reign of Empress Elizabeth of Russia the family reached the height of their influence and wealth and Elizaveta Vorontsova was later a mistress of Emperor Peter III. The family also had a large palace in St Petersburg built to reflect their wealth and influence.

All content from Kiddle encyclopedia articles (including the article images and facts) can be freely used under Attribution-ShareAlike license, unless stated otherwise. Cite this article:
House of Vorontsov Facts for Kids. Kiddle Encyclopedia.