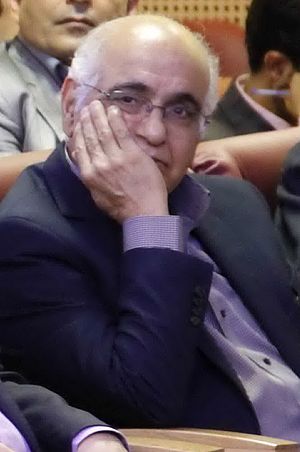 Moradi Kermani in the conference of Kerman in the course of history , Tehran, 30 December 2011.

Houshang Moradi Kermani (Persian: هوشنگ مرادی کرمانی, also Romanized as "Hūshang Morādi-e Kermāni"; born 7 September 1944 at Sirch, a village in Kerman Province, Iran) is an Iranian writer best known for children's and young adult fiction. He was a finalist in 2014 for the Hans Christian Andersen Award.

Moradi Kermani was born in Sirch, a village in Kerman Province, and was educated in Sirch, Kerman, and Tehran.

Several Iranian movies and TV series have been made based on his books. In 2006, Dariush Mehrjui directed Mehman-e Maman based on Moradi Kermani's novel with the same title.

Some of Moradi Kermani's books have been translated into English, Esperanto, German, French, Spanish, Dutch, Arabic, and Armenian. His auto-biography was published by Moin Publishers in 2005, entitled "You're No Stranger Here" (Shoma ke gharibe nistid).

He has won the Hans Christian Andersen, Honorary diploma (1992) and University of San Francisco book of the year (2000).

Houshang Moradi Kermani is a 2018 candidate for the Astrid Lindgren award.

All content from Kiddle encyclopedia articles (including the article images and facts) can be freely used under Attribution-ShareAlike license, unless stated otherwise. Cite this article:
Houshang Moradi Kermani Facts for Kids. Kiddle Encyclopedia.