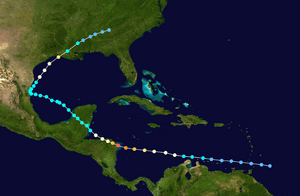 Hurricane Edith of 1971 was a Category Five hurricane. Edith developed from a tropical disturbance on Sunday, September 5 and rapidly strengthened into a hurricane in the Caribbean Sea. She began strengthening on Thursday, September 9 and then made her first landfall as a 160 mph Category Five storm over northern Central America. She later made landfall in western Louisiana on Thursday, September 16 with winds near 105 miles per hour, triggering a tornado outbreak in the Gulf States area. No deaths were reported in the United States, although thirty five lives were taken elsewhere.

All content from Kiddle encyclopedia articles (including the article images and facts) can be freely used under Attribution-ShareAlike license, unless stated otherwise. Cite this article:
Hurricane Edith (1971) Facts for Kids. Kiddle Encyclopedia.