I Didn't Do It (TV series) facts for kids

I Didn't Do It is an American comedy television series that premiered on Disney Channel on January 17, 2014, and ended on October 16, 2015. The series was created by Tod Himmel and Josh Silverstein and stars Olivia Holt, Austin North, Piper Curda, Peyton Clark and Sarah Gilman.

The series follows brother-sister twins, Lindy and Logan Watson, and their three best friends, Jasmine, Garrett, and Delia, as they begin their freshman year of high school at Ditka High. Each episode in the first season began with a comedic "what just happened" situation followed by the story being told in flashbacks. This concept was abandoned in the second season.

Main page: List of I Didn't Do It episodes 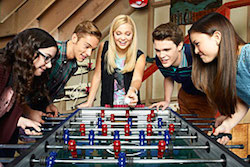 All content from Kiddle encyclopedia articles (including the article images and facts) can be freely used under Attribution-ShareAlike license, unless stated otherwise. Cite this article:
I Didn't Do It (TV series) Facts for Kids. Kiddle Encyclopedia.