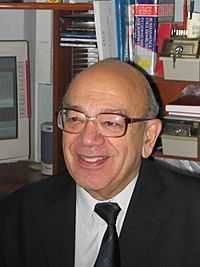 Ilya Iosifovich Moiseev (Russian: Илья Иосифович Моисеев; 15 March 1929 – 11 October 2020) was a Russian chemist. He was an expert in both kinetics and the coordination chemistry of transition metals. He was known for his works in metal-complex catalysis. In 1992, he was elected to the Russian Academy of Sciences. Moiseev was born in Moscow.

All content from Kiddle encyclopedia articles (including the article images and facts) can be freely used under Attribution-ShareAlike license, unless stated otherwise. Cite this article:
Ilya Moiseev Facts for Kids. Kiddle Encyclopedia.