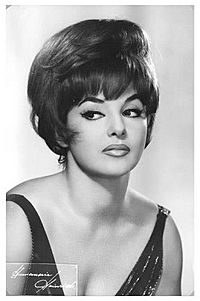 Inés Moreno (1932 – 20 December 2020) was an Argentine actress. She played many femme fatale roles. Moreno was born in Buenos Aires. She was best known for her role as Teresa in the 1958 drama Behind a Long Wall.

Moreno was married to the actor Juan Carlos Barbieri. They had a daughter Andrea Barbieri. She later divorced Barbieri and married the Uruguayan journalist Lucho Avilés.

Moreno died on 20 December 2020 in Buenos Aires from problems caused by a long-illness, aged 88.

All content from Kiddle encyclopedia articles (including the article images and facts) can be freely used under Attribution-ShareAlike license, unless stated otherwise. Cite this article:
Inés Moreno Facts for Kids. Kiddle Encyclopedia.