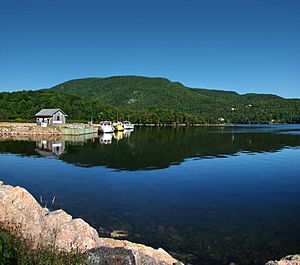 Ingonish is a Canadian rural community in northeastern Victoria County, Nova Scotia. Ingonish is on the northeast coast of Cape Breton Island along the Cabot Trail. It is about 60 km (37 mi) from the shire town of Baddeck. Ingonish is made up of four communities: Ingonish Ferry, Ingonish Harbour, Ingonish Beach, Ingonish Centre.

Ingonish is located at the eastern entrance to Cape Breton Highlands National Park. The regional economy is tied to the seasonal tourism and fishing industries. The community is in the federal electoral district of Sydney—Victoria. Ingonish was one of the first areas settled on Cape Breton Island.

All content from Kiddle encyclopedia articles (including the article images and facts) can be freely used under Attribution-ShareAlike license, unless stated otherwise. Cite this article:
Ingonish, Nova Scotia Facts for Kids. Kiddle Encyclopedia.