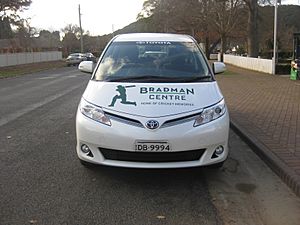 The International Cricket Hall of Fame is adjacent to Bradman Oval, which was named after him in 1947, and, as the Glebe Oval, was where he played many games in his early years, and where his and his wife's ashes are now scattered. The oval and museum are tourist attractions for cricket fans in Australia, and for people visiting from overseas. In 2016, after the ODI win over India in Manuka Oval, Canberra on their way to Sydney Cricket Ground, the squad became the first Australian squad to ever visit the Museum.

All content from Kiddle encyclopedia articles (including the article images and facts) can be freely used under Attribution-ShareAlike license, unless stated otherwise. Cite this article:
International Cricket Hall of Fame Facts for Kids. Kiddle Encyclopedia.