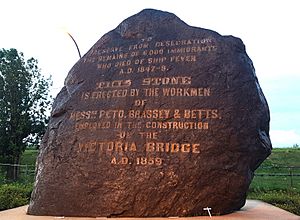 The Irish Commemorative Stone (also known as the Black Rock) is a monument in Pointe-Saint-Charles, island of Montreal, Quebec commemorating the deaths from "ship fever" (typhoid) of 6,000 mostly Irish immigrants to Canada during the immigration following the Great Irish Famine in 1847-48. It is a 30-tonne, 10-foot high boulder.

Officially named the Irish Commemorative Stone, it is more commonly known as the Black Rock and also has been referred to as the Ship Fever Monument or the Boulder Stone.

During the mid-19th century, workers constructing the Victoria Bridge across the St. Lawrence River discovered a mass grave in Windmill Point where victims of the typhus epidemic of 1847 had been quarantined in fever sheds. The workers, many of whom were of Irish descent, were unsettled by the discovery and wanted to create a memorial to ensure the grave, which held the coffins of 6,000 Irish immigrants, would not be forgotten. Erected on December 1, 1859, the stone was the first Canadian monument to represent the famine. The inscription on the stone reads:

This Stone is erected by the Workmen of Messrs. Peto, Brassey and Betts Employed in the Construction of the Victoria Bridge A.D.

About 75,000 Irish people are believed to have emigrated to Canada during the famine. The official figures (from "the Report of a committee of the Honourable the Executive Council on matters of State"), gave the figures of 5,293 deaths at sea, and "Dr. Douglas, the medical Superintendent of Grosse Isle, estimated that 8,000 died at sea in 1847." However, the Montreal Gazette reported in 1934 that 18,000 Irish men, women and children died on the trip to Canada.

The Black Rock continues to be a significant icon, particularly within the Montreal Irish community led by the Ancient Order of Hibernians Canada. Each year at the end of May, the Canadian Irish community hosts a walk from St. Gabriel's church in Pointe St. Charles to the stone to commemorate those lives that were lost.

All content from Kiddle encyclopedia articles (including the article images and facts) can be freely used under Attribution-ShareAlike license, unless stated otherwise. Cite this article:
Irish Commemorative Stone Facts for Kids. Kiddle Encyclopedia.