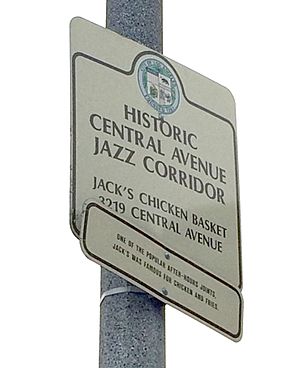 Jack's Basket Room, also known as Jack's Chicken Basket, The Bird in the Basket, The Basket Room, and Jack's Chicken Shack, was a jazz club operated by former heavyweight boxing champion Jack Johnson and owned by Sam Jack Jackson. It featured after-hours jam sessions that went until dawn in the 1940s–1950s. The name originated from the specialty of the house which was fried chicken and shoestring potatoes served in a rattan basket with mixers and ice. There was no alcohol served at the venue, but it was BYOB or patrons were encouraged to go to a local vendor on the corner to buy half-pints of whisky. Jack's Basket Room also hosted Sunday afternoon matinees and had an annual Christmas dinner for underprivileged children of all races. The dinner was started by owner Jack Johnson and manager Bill Hefflin. They served up to 1,000 turkey dinners with all the trimmings and ice cream for desert. Located in Historic South Central Los Angeles (at 3219 S. Central Ave.), Jack's Basket Room was in the heart of the Jazz Corridor, which was the center of jazz in Los Angeles between the 1920s and 1950s. Among the venues on Central Avenue, Club Alabam was one of the best known.

The years of operation for Jack's Basket Room are unclear. According to City of Los Angeles Department of Building and Safety, building owner Sam Jack Jackson applied for the permit in 1944 and sold the building in 1951. The Negro Motorist Green Book listed the venue from 1947 to 1955. "The location was such an ideal spot for impromptu jams that Jack's became the center of the Central Avenue modern jazz scene ... modern music being played on the stand, and the layout of the room gave the proceedings a concert hall aura. In fact, the restaurant must have served at one time as a cabaret or meeting hall, because a large stage, on which sat an old but serviceable upright piano, dominated one end of the room." A typical Friday night in 1947 was "Sportsman's Night" featuring the L.A. Sportsman Scholarship Benefit Club to honor UCLA's basketball and football stars. There were also late Monday night jam sessions with musicians Howard McGhee, Dick Sanford, Sammy Franklin and his Atomics. Joe Lutcher's band and female impersonators entertained crowds with two floor shows between 12:30am and 3:15am. People even stayed for the breakfast dance at 6am.

There were no musicians on the payroll, Wild Bill Moore, who was in charge on hiring the musicians, would keep a rhythm section there. Musicians would show up and start impromptu jams there all night. Bill Sampson broadcast sessions from there every Monday night from KAGH. Many great musicians played there, Charlie "Bird" Parker was one of the regulars. There was a historical event In February 1947, when he got out of Camarillo State Hospital and appeared at Jack's Basket Room. Trumpeter, composer and bandleader Gerald Wilson remembered : "The place was packed. Couldn't even sit down. Bird came to the bandstand, and a roar went up from the crowd like the one for Clinton at the inauguration.

All content from Kiddle encyclopedia articles (including the article images and facts) can be freely used under Attribution-ShareAlike license, unless stated otherwise. Cite this article:
Jack's Basket Room Facts for Kids. Kiddle Encyclopedia.