James A. Johnston facts for kids

James Aloysius Johnston (September 15, 1874 – September 7, 1954) was the first and longest serving warden of Alcatraz Federal Penitentiary in the United States, serving from 1934 to 1948.

Orphaned at the age of ten, he began working at age 15 at Weinstock, Lubin and Co., selling ties in the menswear department. He rose to General Manager of Weinstock Lubin. He later started Johnston's Men's Wear at 916 Market Street in San Francisco. He was elected to the San Francisco Board of Supervisors in 1907 and was appointed Chair of the California State Board of Control in 1911. He served as wardens of Folsom and San Quentin. 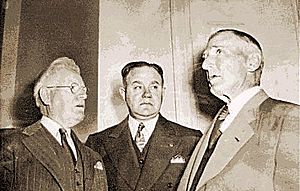 It was Johnston who was instrumental in the development of the Alcatraz Federal Penitentiary as a prison and was involved in the design of it as a federal prison in 1934. He served as the first warden of Alcatraz from 1934 until 1948. He was considered to be a highly strict disciplinarian and a devout reformist who imposed a number of rules upon the prison including a strict code of silence, which led to him being nicknamed the 'Golden Rule Warden' from his San Quentin days.

He was relatively popular among inmates and guards, known as "Old Saltwater" to the inmates, and is credited with challenging the barbaric tactics used in the prison when he was there, including strait jackets and solitary confinement in darkness and working towards the general improvement of the lives of prisoners. In 1937 he was assaulted by Burton Phillips from behind in the Dining hall who beat him in anger at a worker's strike, but he continued to attend meals unguarded.

Ten of the fourteen escape attempts took place during his tenure, including the one that resulted in the Battle of Alcatraz. Johnston wrote several books about their experiences, including "Prison Life is Different" where he documents his time spent as warden at Folsom, San Quentin, and Alcatraz. He was married to Ida Mae Fulton and had one son and three daughters. He died of a bronchial infection on September 7, 1954 in San Francisco, California.

All content from Kiddle encyclopedia articles (including the article images and facts) can be freely used under Attribution-ShareAlike license, unless stated otherwise. Cite this article:
James A. Johnston Facts for Kids. Kiddle Encyclopedia.