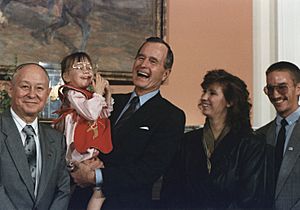 Jessica McClure Morales (March 26, 1986), better called Baby Jessica, became famous at eighteen months because of an ordeal in Midland, Texas in which she tumbled into a well on Wednesday, October 14, 1987. Between then and October 16, workers spent almost 58 hours to free her from the 8 inch wide well casing 22 feet below the ground. This story gained worldwide attention, and became the subject of a television movie two years following the incident.

All content from Kiddle encyclopedia articles (including the article images and facts) can be freely used under Attribution-ShareAlike license, unless stated otherwise. Cite this article:
Jessica McClure Facts for Kids. Kiddle Encyclopedia.